We're pleased to announce the judges for our 2015 Literary Awards in fiction, poetry, and creative nonfiction! Contest submissions will open March 5; there will be a $17 entry fee for each submission, and all entrants will receive a one-year subcription to Ninth Letter. Check back here in a couple of weeks for complete guidelines!

Jac Jemc is the author of the story collection A Different Bed Every Time (Dzanc, 2014) and the novel My Only Wife (Dzanc, 2012), which was a named a finalist for the 2013 PEN/Robert W. Bingham Prize for Debut Fiction and winner of the Paula Anderson Book Award. Her chapbook of stories, This Stranger She'd Invited In, sold out at Greying Ghost Press in March 2011. Her writing has appeared in such publications as Ninth Letter, Barrelhouse, PANK, Midwestern Gothic, and many others. She is a web fiction editor for Hobart and poetry editor at decomP.

Matthew Gavin Frank is the author of Preparing the Ghost: An Essay Concerning the Giant Squid and Its First Photographer (Liveright/W.W. Norton), which was named one of Shelf Awareness' Best Book of 2014. His other nonfiction books are Pot Farm (Univ. of Nebraska), and Barolo (Univ. of Nebraska); and his poetry books are The Morrow Plots (Black Lawrence), Warranty in Zulu (Barrow Street), and Sagittarius Agitprop (Black Lawrence). Recent work has appeared in The Best Travel Writing and The Best Food Writing anthologies, The New Republic, The Huffington Post, Ninth Letter, Brevity, Creative Nonfiction, and others. He teaches at Northern Michigan University.

Kathy Fagan’s latest collection is Lip (Eastern Washington UP, 2009); her new book, Sycamore, is forthcoming from Milkweed Editions in 2016. She is also the author of The Raft (Dutton, 1985), MOVING & ST RAGE (Univ of North Texas, 1999), and The Charm (Zoo, 2002). Her work has appeared in many publications, including The Paris Review, The Kenyon Review, The New Republic, Ninth Letter, Extraordinary Tide: New Poetry by American Women (Columbia, 2001), and Poet’s Choice (ed. Edward Hirsch, Harcourt, 2006), among others. She is currently Professor of English at Ohio State University, and serves as Poetry Editor of OSU Press and Advisor to The Journal. 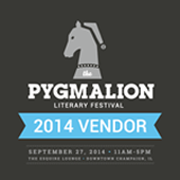 This week we are thrilled to be co-sponsoring the the Pygmalion Festival, Champaign-Urbana's four-day festival of music and literature. The lit portion of this year's festival showcases a huge number of amazing authors, including Matthew Gavin Frank, Jamaal May, Richard Siken, Alissa Nutting, Charlotte Pence, and so many more—plus a book fair on Saturday, September 27, where you can find books by our visiting authors AND some of the best indie journals and presses in the country.

After the book fair, on Saturday, from 4-6 p.m., a few of those journals and presses will be hosting the Lit Crawl, two hours of quick, fun readings by 24 writers in some of our favorite venues in downtown Champaign. We hope you'll come down and enjoy a drink and hear some fast fantastic fiction and poetry by these terrific authors!

Four selections from Ninth Letter have been recognized on the Notable lists in the 2014 Best American series:

"Recidivism" by Mary Miller and "Provenance; or, Notes from a Vanished Archive" by Michael Leone were listed among the 2013's Notable stories in Best American Short Stories 2014;

"Holiday" by Ariel Lewiton and "On the Far Side of the Fire" by Jessica Wilbanks (winner of our 2013 Literary Award in Creative Nonfiction) were listed among 2013's Notable essays in Best American Essays 2014;

"On the Far Side of the Fire" was also listed as Notable in Best American Non-Required Reading 2014.

Congrats to these authors! We're proud to have published their work.
Posted by Jodee Stanley 0 comments 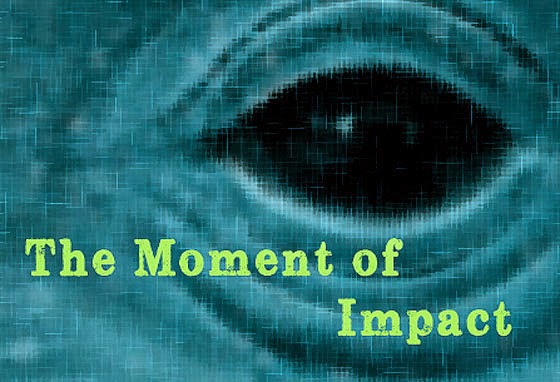 New at ninthletter.com--"The Moment of Impact," a short story by Argentinian writer Elvio Gandolfo, translated by Will Vanderhyden. "The Moment of Impact" is from the anthology A Thousand Forests in One Acorn: An Anthology of Spanish-Language Fiction, forthcoming this year from Open Letter Books.